Tangible Bits: Towards Seamless Interfaces Between People, Bits and Atoms  by Hiroshi Ishii and Brygg Ullmer @ MIT Medialab / Tangible Media Group. It is not a proposed solution but hopes to “raise a new set of research questions to go beyond the GUI (graphic user interface)”

In the paper they break down 3 essential ideas of Tangible bits:

It begins with the reflection on how before computers people created a rich and inspiring range of objects that measure the passage of time, predict the planets movements, to compute and draw shapes. A lot of them are made of a range of beautiful materials from oak to brass( such as items in the Collection of Historical Scientific Instruments).

” We were inspired by the aesthetics and rich affordances of these historical scientific instruments, most of which have disappeared from schools, laboratories, and design studios and have been replaced with the most general of appliances: personal computers. Through grasping and manipulating these instruments, users of the past must have developed rich languages and cultures which valued haptic interaction with real physical objects. Alas, much of this richness has been lost to the rapid flood of digital technologies.”

What has been lost in the advent of personal computing? How can back physicality and its benefits to HCI. This question brought them to the thought of Bits & Atoms. That “we live between two realms: our physical environment and cyberspace. Despite our dual citizenship, the absence of seamless couplings between these parallel existences leaves a great divide between the worlds of bits and atoms”. Yet we’re expected at times to be in both worlds simultaneously, why do our interfaces not reflect or provide this bridging(thinking at the time of the published paper)? 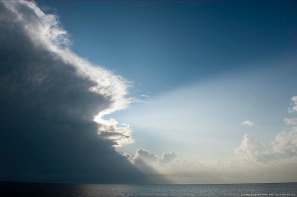 They mention that we have created ways of processing info through working with physical things like Post it notes.  Or how we might be able to sense a change of weather through a shift in ambient light. However these methods are not always folded into the developing of HCI design. That there needs to be a more diverse range of input/output media – currently there is “too much bias towards graphical output at the expense of input from the real world”

From Desktop to Physical Environment: GUI to TUI

Xerox Star workstation laid the foundation for the first generation of GUI, a desktop metaphor,

” The Xerox Star (1981) workstation set the stage for the first generation of GUI, establishing a “desktop metaphor” which simulates a desktop on a bit-mapped screen. Also set several important HCI design principles, such as “seeing and pointing vs remembering and typing,” and “what you see is what you get.”

Apple then brought this style of HCI to the public in 1984. Pervasive through Windows and more. In 1991 Mark Weiser published “Ubiquitous Computing.”

Keywords tangible user interface, ambient media, graspable user interface, augmented reality, ubiquitous computing, center and periphery, foreground and background. It showed a different style of computing / HCI that pushes for computers to be invisible. Inspired by this paper they seek to establish a new type of HCI called “TUIs”. Tangible User Interfaces, augmenting the real world around us by pairing with digital information to everyday things and spaces.