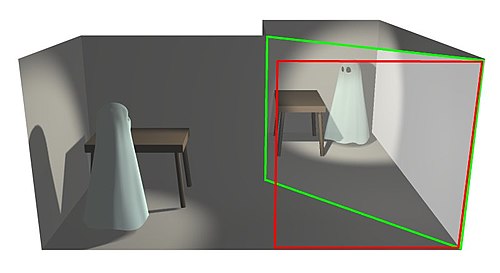 My Halloween Midterm partner is the wonderful Jiwon Shin!  ❤ ❤ ❤  Initially we were inspired by the optical effect of a Pepper’s Ghost hologram .  After some super fun brainstorming (and some pepper’s ghost youtube watching), we landed on the idea of  using an accelerometer to sense if we’ve “shaken” ( tilted ) a bottle or not to help a trapped soul escape.We were very inspired by Yoko Ono’s exhibit “We are all water”

Using our P5.js code, the accelerometer reads whether we’ve tilted the bottler or not, and keep count of “shakes” after you shake say 6 (maybe 3?) times, the image then escapes the bottle. With each shake, the image distorts some – utilizing a Particle Effect in the style of Nature of Code. We also thought that the particle effect did a great job of mirroring the distortion trope of many scary movies? of a slight but less scary headshake distortion?

The idea is that we will have an image imported in p5.js of a person on a smartphone screen, which is slid securely into a slot of our fabricated bottle. There will be a 45 degree angle piece of clear (or maybe 2 way mirrored? acrylic) That eerily reflects the smartphone screen, making the illusion of it floating in the bottle. Shake the bottle to help the soul/ person escape from the bottle ❤

I met up with resident Yeseul Song to talk a little bit about Fabrication ideas and was very inspired by her project Liquid light, thinking about acrylic box construction & accelerometer.  As well as Animalia Chordata by Gabriel Barcia-Colombo