In our first class we talked about the inputs and outputs of people and machines, and asked the question, “Is turning on a light switch an interaction?” Some people felt that it was a directed action  not necessarily an exchange, that there needs to be another level of receiving feedback for it to be an interaction verses a command? I’m not quite sure what I think about the light switch example. I think there are levels of interaction happening within the system of the lightbulb, elements that are in communication with one another in order for it to turn on. And maybe the additional layer of feedback that makes it a conversation and therefore interactive? is that we have a level of emotional response or a small feeling of validation if the lightswitch actives the light when switched.  When it doesn’t turn on, we definitely have a feeling of confusion, and disappointment. The lack of light then means we must then search for another light source, or are being told we need to replace the bulb?

However, I think I tend to lean towards the definition below found when entered in google, that it’s “the process of two people or things working together and influencing each other.”  I also think that maybe the lightbulb switch is ‘an interaction’ but not necessarily ‘interactive’. That more feed back and conversation needs to happen between the parties involved.

Chris Crawford’s definition in The Art of Interaction Design is also interesting.” I choose to define it in terms of a conversation: a cyclic process in which two actors alternately listen, think, and speak. The quality of the interaction depends on the quality of each of the subtasks (listening, thinking, and speaking). And many things commonly held to be interactive are not.  — Chapter 1 / “What exactly IS interactivity.

Would you consider slides or seesaws interactive? 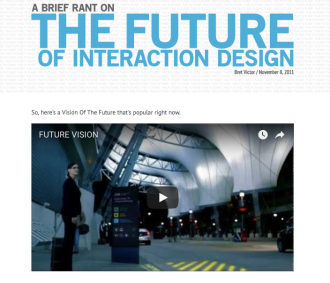